Lily's Legacy offers rehabilitation and permanent sanctuary for dogs who, for reasons of age or ill-health, would be considered poor candidates for adoption at shelters. Although most of the dogs who come to Lily's Legacy stay for only a few weeks to a few months until they are found a forever home, some remain in residence for more extended periods while undergoing assessments of their health, or while awaiting or recuperating from medical procedures. Depending on the outcome of such tests and treatments (and other factors affecting their happiness and well-being), our long-term residents may either become available for adoption or remain with us for the rest of their lives as permanent residents. 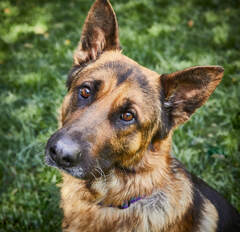 ​Cute, cute Cooper wormed his way into everyone's heart here at Lily's - especially our founder, Alice's. As we all know, she's a softy for German Shepherds. So guess what!! He managed to move right from our bunkhouse where he was recovering from his broken leg into the main house. He’s great with the house pups and has happily learned his place in the pack. Cooper is home and all the volunteers are delighted - now they get to see him every week during their shifts.

​Welcome home, Cooper! You are loved ❤

Lily is an 11- or 12-year old German Shepherd. She came to us from a very sad owner surrender situation. She had lived with the same couple her whole life. Her human mom passed away and then her human dad was ill and lost his home.

She is super sweet, has had some big losses and now finally feels safe and loved again. She has found her fur-ever home here at Lily's where she will never want for love or attention.
Angie and Tanner

Lily's Legacy's Abbie first spotted Tanner, a 10 year old yellow lab on PetHarbor. She (yep Tanner is a she!) had recently been owner surrendered at the Sonoma County Shelter. This happens to be the same shelter where Angie (then Angel) came from. Alice named her Angie in honor of Angie the Animal Services Director who had helped Angie land at Lily’s. As Abbie and Angie were talking, they both realized the connection....Tanner and Angie (the dog) had lived together at the same house! At some point Tanner had been given away and Angie stayed behind.

As fate would have it, Tanner was surrendered to the Sonoma County Shelter. Our Abbie pulled her from the shelter. When Abbie brought Tanner to Lily’s, Angie was patiently waiting in the corral. As soon as Tanner came through the gate there was no doubt they remembered each other. Oh my, what a joyful reunion it was to witness. Tanner was kissing Angie, they were all over each other, so happy to be back together! In less than 24 hours the decision was made... no way we were going to separate the "sisters" again. Tanner is here to stay as a permanent house resident and BFF to Angie! Hurrah!

In Memoriam
Always in our hearts
​ 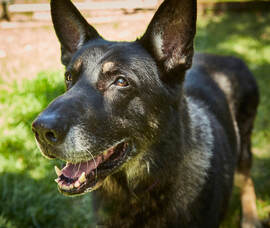 Our beautiful Jake has left us suddenly for Rainbow Bridge.

He was such a sweet soul who had health challenges from degenerative myelopathy but just kept on keeping on. He never let his wobbly rear end stop him. He loved his housemates, following mama Alice around the house and his life as a house dog at Lily's.

He was an inspiration to us all - for enjoying the moment and any and all attention. You are missed, sweet Jake. 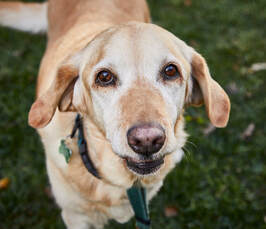 In February, our beautiful girl Tanner left us for Rainbow Bridge. Alice and her "sister", Angie were with her as she slipped peacefully away.

Tanner was always happy, smiling and wagging her tail. Her cancer came back and progressed rapidly. There was no treatment for it and we lost her way too soon. She was a joy and a friend to us all - humans and doggies alike... our truly perfect pup, adored by all.

You are forever in our hearts, sweet Tanner

Our sweet, sweet Sammy left us for Rainbow Bridge. His health had been declining for several months. Sammy will be missed beyond measure - his adorable self and gentle nature always present. He just wanted to be where the people were and loved any and all attention he could get. We knew Sammy would have preferred to have had a 24/7 volunteer dedicated to hands on attention for him. But he was never pushy about it - just grateful for any TLC that came his way. And he got a lot!!! He was impossible to resist. Our sweet boy will remain in our hearts forever and his spirit and cute mug the face of Saving Senior Dogs Week. 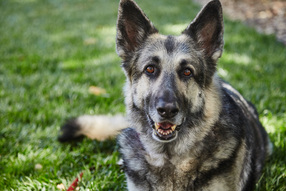 ​Our lovely Sara, a senior German Shepherd Dog, was a devoted companion to our director and founder. She passed away on May 17, 2020.

She leaves a huge hole in Alice's heart and in the hearts of all of us who had the honor of spending time with her. 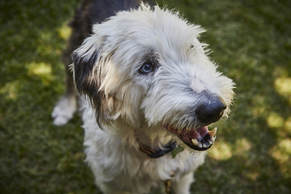 Rest in peace dear boy.  We will miss you. 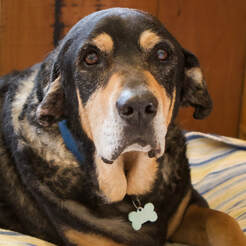 Our cute Henry, a 10 year old deaf Rottie/Hound mix, came to Lily’s from the central valley where he was whisked from a shelter “just in time.”

In the summer  of 2019, it was decided that Henry’s forever home was right here at Lily’s, the only “real” home he had ever known. Henry became a Permanent Resident and assumed the role of Lily’s Ambassador left vacant by our sweet Andy. We all loved Henry and were so glad he would be with us the rest of his days. Sadly, that day came too soon. On February 6th, 2020 Henry left us for Rainbow Bridge.

We find comfort in knowing that Henry spent his final chapter at Lily's where he was loved and adored by all who knew him. We will miss his greeting at the door. The barn just won’t be the same without big ole Henry stretched out half on/half off his bed with his tongue peeking out, softly snoring.

RIP dear Henry, you will always be in our hearts.