Our Foster and Fospice Dogs

Fospice: Foster homes or sanctuaries which provide end-of-life comfort and care to terminally ill or elderly shelter animals until they're ready to pass on to the Rainbow Bridge.
Donate to help our fospice dogs!
Thank you!

​• ​They say there’s a nobility in making an animal’s last days their happiest, best days •
​

Chance is a 10/11 year old Aussie mix from Hanford CA. He was an outdoor dog living with cats and several small dogs. After his owner died, all the animals were re-homed, Chance was the last one left. Thankfully, through a coordinated effort of Good Samaritans, Chance found his way to Lily’s.

We recently found out that he has a tumor on his lung. Unfortunately, the x-rays showed the tumor has grown a bit in a short period of time. At this point, we do not know how long he has left but he will live out his days well loved and cared for by his new fospice mom Mary in beautiful Colfax, CA.

Mary had contacted us a couple of months ago wanting to do fospice. She has had many dogs over the years and has managed all manner of health issues. Recently Mary emailed saying she would like to fospice Chance. When she met Chance, he greeted her with kisses to seal the deal. It was a good match! He hopped right in her car and off they went!

We are both happy and sad, Chance takes a piece of our hearts with him.
In Permanent Foster: Huxley 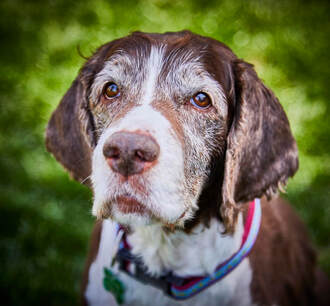